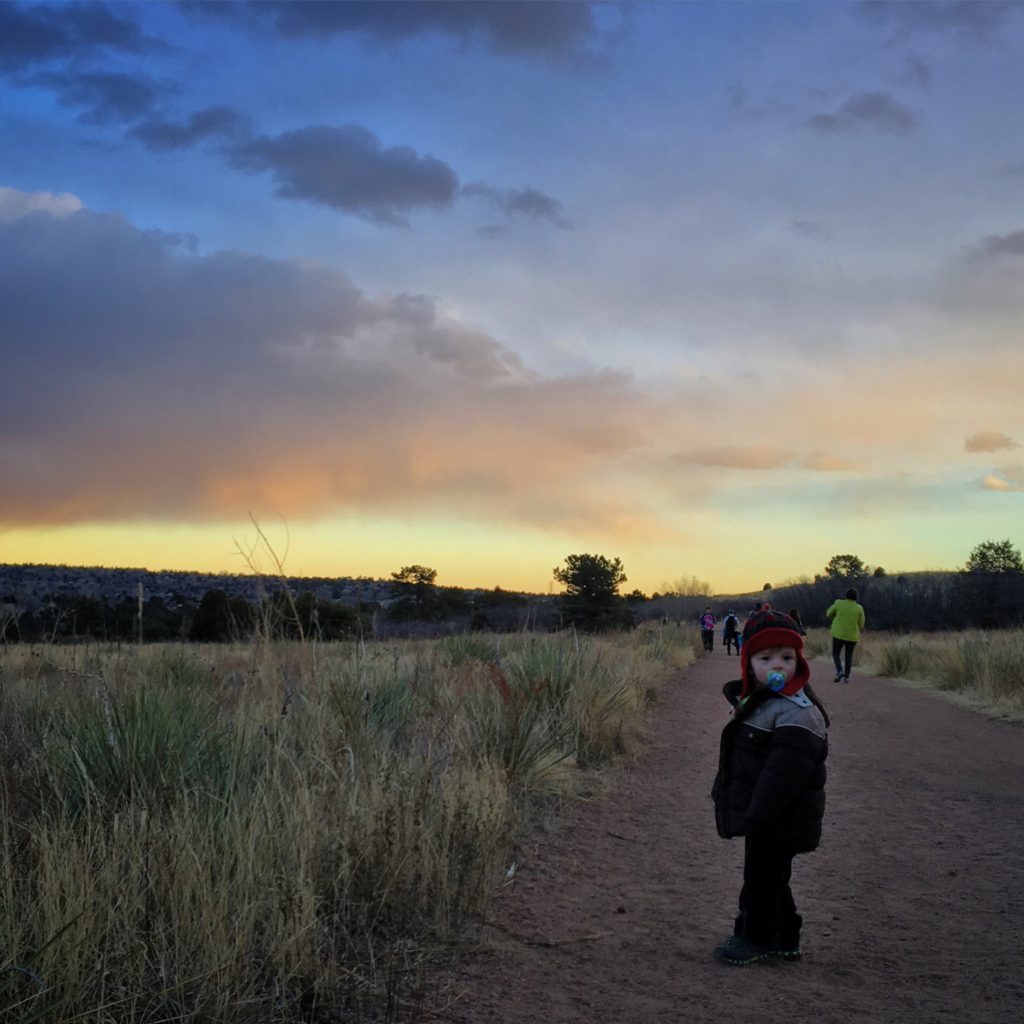 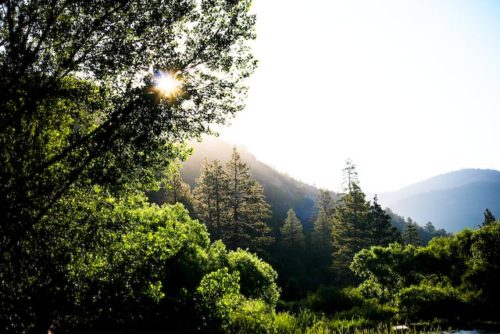 This morning as I lay in bed awake but with my eyes closed, I listened to Thing 4 breathing near my cheek and felt the warmth of Brent’s body against my back. The night had been rough with Thing 3 waking up multiple times in tears and Thing 4 needing to be nursed for what seemed like a million times. But now with the soft grey light curling around the blinds, everyone but me was sleeping soundly. It was cozy. I didn’t want to wake up because that meant letting go of the comforting blanket of peace that surrounded us and embracing the everyday chaos of taking care of a toddler, baby, and two teens. Instead, I thought about how whole and safe I feel in our nest of a bed tucked away in the slide out of the RV. Eyes still closed, I reached out to tighten the curtain when my hand abruptly fell through the imagined wall.

Saying goodbye to our beloved RV. The family who bought it has two little boys and lives in it full time too.

It’s been just over a year since we moved out of the RV. Even though we knew our decision to stop full time RVing was the right one, moving out of the RV was easier said than done. With the help of some friends, it only took a few hours to get all our stuff out of the RV. The emotional “moving out” has taken much longer. For Brent and I, it’s been a surprisingly difficult painful new “road”.

Settling down has been a kind of divorce. The dreams we had of our future have changed drastically. The way an identity can get wrap up in a spouse, much of Brent and I’s identity, naturally, got wrapped up into being nomads. Over the last year we have been fumbling around trying to figure who we are as suburbanites. I’m not intending to minimize divorce. One way to look at divorce is “a complete separation of two things.” Our two lives, the one on the road and the one in a house, are so completely different, so separate, and so often, very lonely.

But if living full time in an RV taught us one thing, it taught us we are adaptable.

Our last family photo in front of the RV.

The kids, as kids most often do, adapted quickly. The hardest months for the teens were when they started school but we were still living in an RV. The best part about our home on wheels were the wheels and when the wheels weren’t rolling it was an entirely different experience. They didn’t want to invite friends over or be dropped off at the campground. While Brent and I were more than happy to share why we lived in an RV, what mattered to the teens was what other people thought. 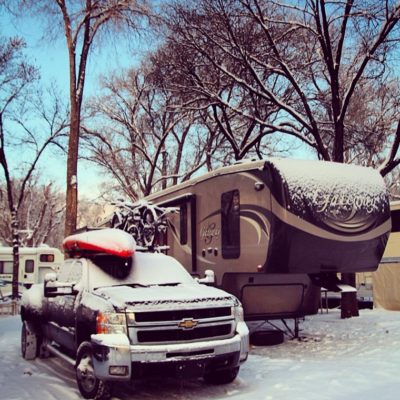 Our last campground as full time RVers, Garden of the Gods RV Resort, was a wonderful spot to visit but a bit cramped for an extended stay.

We had planned to stay in the RV for an entire year after being stationary but soon realized that wasn’t going to work. Not only were the boys embarrassed, our 41′ RV shrunk exponentially once we quit moving. Having Yellowstone or Lake Superior as the playground in your backyard is much different from the city campground where the RVs are crammed together like books on a bookshelf. So we found a house and a few months later said goodbye to the RV.

For months after settling down, I struggled on and off with depression It’s a rather long story but the short of it is I did not adjust easily back to life in a house after four years on the road. It’s been hard. Really hard. At times, I’ve felt like I’m 19 again but not in the life-is-an-open-road-awesome-way but in the lost lonely what-am-I-doing-way. It sucks to be 39 and feel like a depressed confused 19 year old. 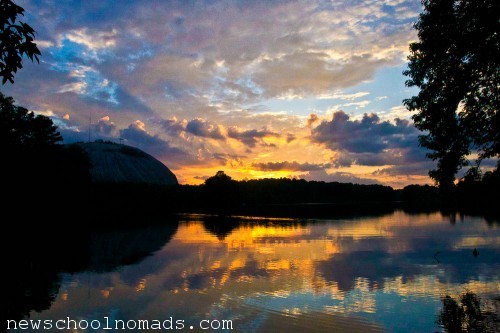 So grateful for the hundreds of magnificent sunrises and sunsets that we witnessed all over our country.

I’ve been trying to feel grateful for the life we had and I do. I feel extremely grateful but when I only focus on being grateful and try to bury all of the other emotions, I feel bad. I feel angry at myself for feeling any other emotion other that gratitude. Then I feel disconnected from the people around me because “they don’t get it”. And mostly I feel guilt. Guilt for feeling angry and disconnected and for basically feeling anything else other than gratitude. So then I try harder to feel grateful and the cycle would continue.

To break the cycle I needed to let myself grieve. It felt silly to grieve something that I realize I was very fortunate to experience like grieving a stain on a designer blouse. You know, first world problems. But judging my feelings only served to keep me on the disconnected emotional hamster wheel. So now I let myself grieve as needed and try to suspend judgment on my feelings. 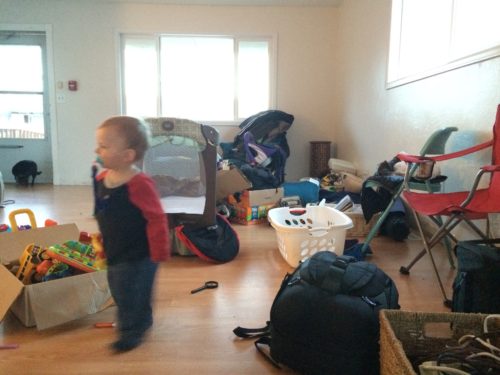 Our stuff the day we moved out.

We spent years preparing to get on the road but didn’t give much thought for preparing to get off the road. There were practical and financial challenges like starting over with nothing in terms of furniture and selling our truck and RV to replace them with something more weekend friendly. The month following Thing 4’s birth our family couldn’t go anywhere together because our truck only sat five people. There were emotional challenges like letting go of my dream to homeschool the boys and watching our friends travel while we sit still. There were physical challenges like having a new baby and the hormonal sleepless nights that followed. There were relational challenges of connecting with each other in the mundane and finding friends in our new community. It was so easy to connect with other nomads but we’ve found it hard in a town of 500,000+ people to find our tribe. After four years in the slow lane, I had forgotten how busy people are and it’s been overwhelming. I can’t and don’t want to keep up and often feel like I’m on the outside looking in. To top it off, there is the spiritual challenge of having found my identity in the external, being a nomad, instead of finding it in the internal, which for me is God. Nothing like a little identity crisis to keep the emotional roller coaster oiled. 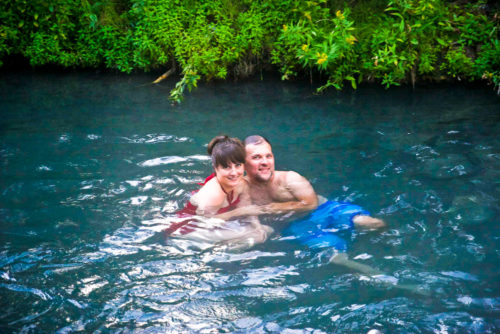 Brent and I experiencing Laird Hot Springs on the Alcan (Alaskan Highway) in British Colombia.

I once read an article that said having adventures, big and small, were the secret to long lasting happy marriages. I think about all the people I know who are happily married, not the ones who manage to get along and check off life’s boxes like efficient business partners, but the ones who delight in each other, the ones who share a certain noticeable energy that seems to propel them through life. I’ve noticed most of these people make adventure a way of life whether it’s driving across the county to see an iron bridge, taking a different way home just because, trying new restaurants, challenging their minds together, or spontaneously flying to France because they found cheap tickets online. (Umm…that would be my crazy parents.) This past year we’ve been so overwhelmed by adjusting back to a normal life with things like electric bills and school commitments that we’ve almost forgotten to have fun. It was like suddenly after 16 years our honeymoon was over. 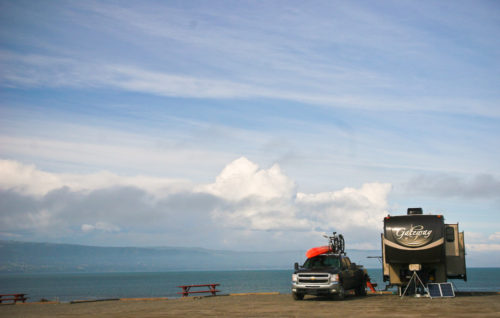 RVing on the Homer Spit in Alaska.

Brent misses traveling full time just as much as I. The other day he told me he thinks about being in Alaska nearly every day. So even if it’s hard to connect over who is going to pick up the boys after school or do the grocery shopping, there is always the crashing waves along the Homer Spit or the golden leaves in Yukon. We can go there in our imaginations together as we continue to figure out how to have adventures while making sure the gas bill gets paid.

Life as a suburbanite isn’t all bad. Like most of life, it’s a matter of perspective and attitude. I’m slowly incorporating things that I used to enjoy about being in one place like going to libraries and getting in my  favorite cashier’s line at the grocery store. <== I’m obviously the life of the paaartay. Simple things that I didn’t realize I missed. I’m an introvert and homebody so it’s hard for me to get out and meet people but it’s happening. Slowly. 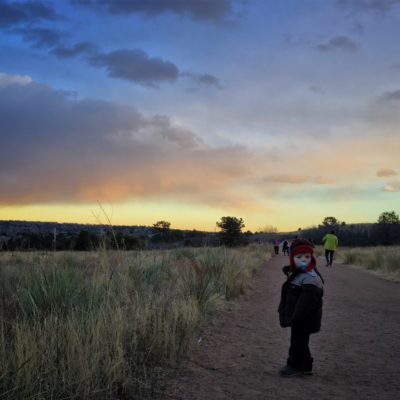 Slowly, I’ve been able to stop wishing I still lived in our past and embrace the moments I’ve been given in the present and the people God is putting in my path no matter where I am.

It may sound trite but every day really can be an adventure of some sort and I’m committed to finding that adventure even if it’s in my own backyard. 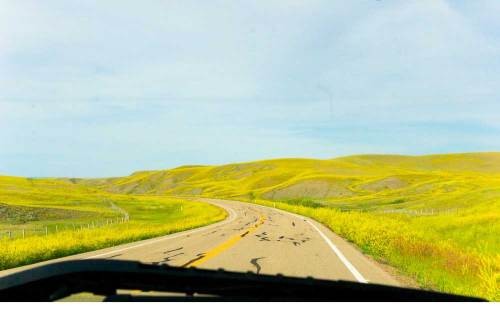 My happy place. (This was taken in Alberta, Canada.)

Plus summer break is just around the corner and the whisper of the open road is growing louder.