In October of 2011, after selling most of our stuff, we hit the road to RV full time with our two boys and three pets. When we started traveling the road community was small compared to what it is now. Instagram was just gaining traction and there weren’t hashtags to help you find your tribe. Regardless, we began to thrive. We met other nomads who made an impact on our lives and our year long plan morphed into an open ended adventure. We embraced the nomadic life traveling to 49 states. In 2014, we welcomed our third child. Baby Nomad was born in our RV in Florida. Six weeks after he was born we made an epic drive from Key West, Florida to Alaska. In 2015, we spent the winter snowboarding across the Rockies and appeared in one of the first episodes of Going RV.

Despite all the fun we were having, the Bigs needs began to change as they became teens and we realized they needed more than what we could provide for them on the road. Brent and I reluctantly made the decision to settle down but didn’t know where. When spent the next six months visiting towns and schools and compiling pages of notes comparing each place. We decided to put down roots in Colorado. However, the road is always calling. We will forever be nomads at heart and look forward to hitting the road again with our the Littles (we had a fourth baby a month after moving out of the RV) once the Bigs have taken flight.

Those four years were some of the best of our lives. The Bigs got the education of a lifetime. Mothering became a joy rather than a chore. Our memories are as numerous as the miles we drove. Most impactful, we learned that less really is more. Today we continue to choose life in the slow lane even though our full time house no longer has wheels. We still travel every chance we get in our 1998 Airstream. On this blog we share travel tips, advice for full and part time RVers, thoughts on simplicity, our homeschooling journey, and the simple moments that fuel our souls.

The Cast of Characters

I write this blog. I want to inhale life into every crevice of my lungs and fill my life with experiences not things. I love music, art, reading, exploring far and near, hiking, people watching, nature, laughing, and God. I also enjoy blogging over at Go RVing. You’ll always find a tube of red lipstick in my purse and my husband still gives me butterflies. I hope I die at 102 by getting thrown off a horse. 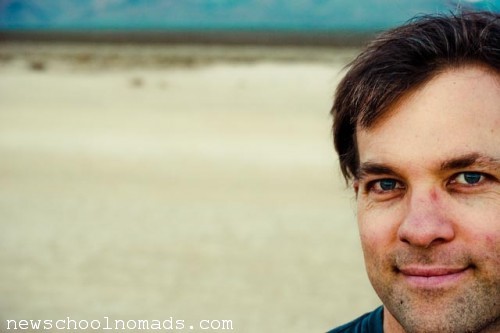 Brent is the primary provider for our family and my soul mate. He married me which proves he is  crazy to the core. (We have unlikely love story you can read here.) He is quiet, thoughtful, intense, and makes the best maple ice cream in the entire world. No joke. Brent loves music, art, food, technology, making stuff work, traveling, and playing drums. He provides for our family by doing freelance graphic/web design, video editing, and the occasional video project. You can see some of his work at Nims Media.

Thing 1 and Thing 2 (the first litter)

We have referred to Thing 1 (left) as the youngest old man since he was three years old.  At six year old he loved wearing his robe, looking at real estate, Mac computers, classical music, and playing the piano. He still loves all those things!

Thing 2 is playful, loving, easy going, and can make friends with anyone.  He loves playing guitar, wrestling with our dog, Woody, video games, music, theater, and art. And he’s a great babysitter! The littles LOVE when he plays with them.

Thing 3 (left) is almost a carbon copy of his oldest brother. He is spirited, loves “bad guys”, and has an opinion about EVERYTHING. It’s like raising another first born.

Thing 4 is laid back (for a two year old), loves to play and cuddle. He love animals and making people laugh. He eats up being the baby of the family!

Thing 3 and 4 make Brent and I feel like we are living in a perpetual state a déjà vu.

We adopted Woodrow or Woody in 2017. He’s half Black Lab and German Shepherd and 100% amazing. He lets the littles jump all over him without so much as a grunt. He likes to steal trash and have us chase him, ride in cars, and go on hikes. He’s our only pet left. 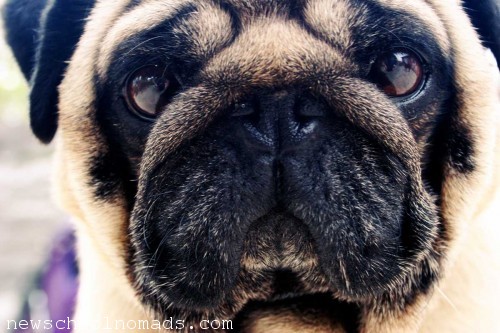 Originally from Wasco, CA, Nigel joined our family as a pup when Thing 1 was just a year old. I don’t think there has ever been a more chill (or clueless) dog on the planet. We said goodbye to him on a fall afternoon in 2014 while staying in a campground in Portland, OR. We had returned from our journey up to Alaska. We like to think he hung on long enough to put that last sticker on the map with us.

Nico joined the family as in impulsive Valentine’s Day gift from me to Brent in 2003. Although, it was clear her heart belonged to Thing One. Nico was part of our family for 15 wonderful years. She made it to all 49 states with us. We said a very hard unexpected goodbye to her in March, 2018. Thing 1 was in CA visiting colleges with his grandparents. We tried to fly him home in time so he could pet her one last time but the vet made it clear to us she wouldn’t last long enough for him to return. Grateful for technology, we Facetimed so he could say his goodbye and play the song (the house where he was staying had a piano) he wrote for her. It was heartbreaking. 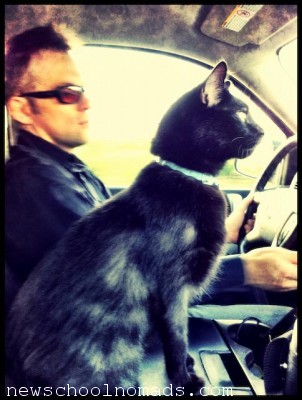 Meow Cow found our family as skinny homeless kitten in a parking lot while we were in Indiana for my brothers wedding back in 2005. We brought him back to California on a big jet plane. MC really embraced the “riches” part of his rags to riches story by insisting that he be served on a hourly basis. He loved traveling full time in an RV. Really he did! You could always find him on the console between Brent and I looking out the windshield or curled up in one of the Big’s lap. We said goodbye to our beloved MC in April, 2018 three weeks after saying goodbye to Nico. He is terribly missed.