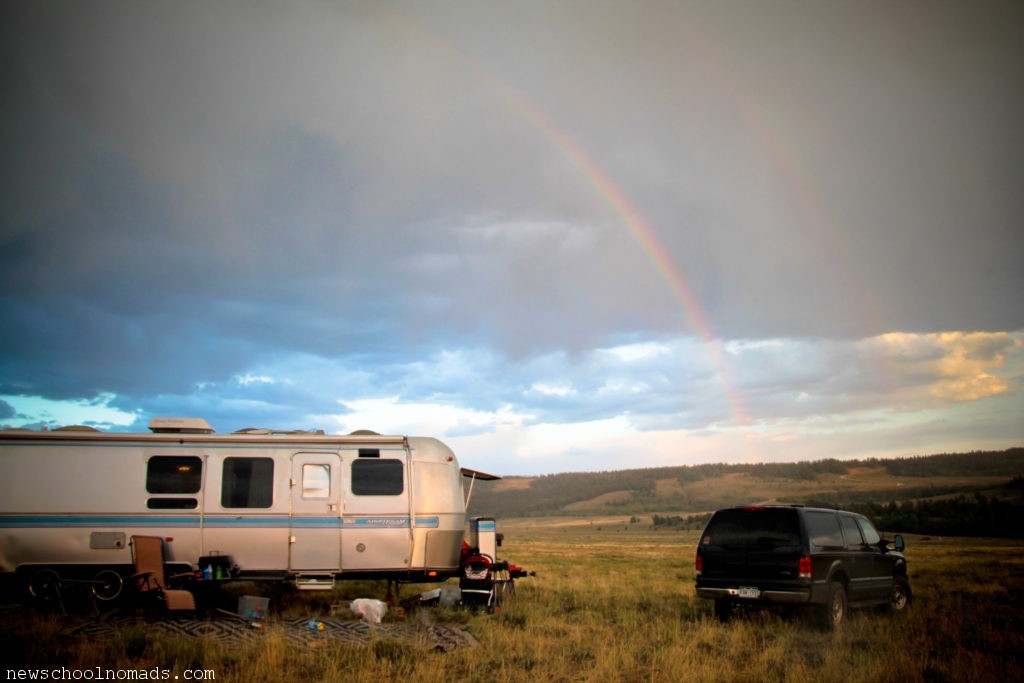 Leading up to the eclipse I was ho-hum.  It seemed like people has been talking about it for months and months. Friends of ours were going to a fulltime RV family solar eclipse meet-up in Oregon but I thought it was just a fun little excuse  to get together or a theme or something. I just didn’t get the hype. As a child, I remembered seeing a partial eclipse and feeling underwhelmed. Then two weeks ago, I decided to look up what all the fuss was about and learned that this eclipse was special because it was going to cut across the entire United States. Cool. I also looked at the map and saw that the path of totality was crossing not too far north of us in Wyoming. I really wasn’t sure what the path of totality meant but a road trip sounded fun. Still we had just gotten back from a two month road trip and Thing 1 had only been back in school a week. Certainly, it wouldn’t be worth pulling him out for a day and driving five hours with toddlers for a two-minute and twenty-second show in the sky. After all, we would see nearly 90% covered in the Springs. How much better could 10% be?

Not only was the eclipse one of the most incredible things I have witnesses in my life, the entire weekend was pretty darn magical. 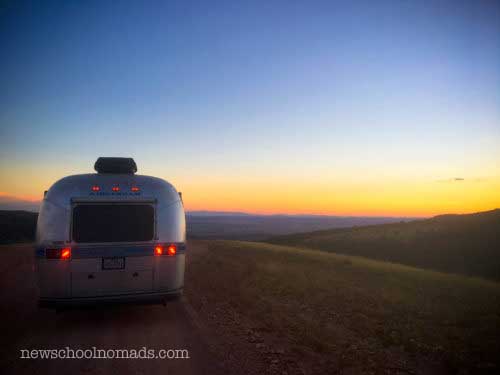 Being last-minute planners meant we didn’t have reservations so we took our chances and headed up to Muddy Mountain, Wyoming in hopes of finding a spot to boondock on BLM land. It was getting dark as we wound our way up the dirt road and we were starting to get nervous about finding a spot to set up the RV. Parking in a campground after dark is not the best idea but finding dispersed camping on public lands after dark is dumb. Really dumb if you are pulling a big trailer. Of course, the setting sun didn’t stop me from jumping out to take a picture on our way up the mountain. 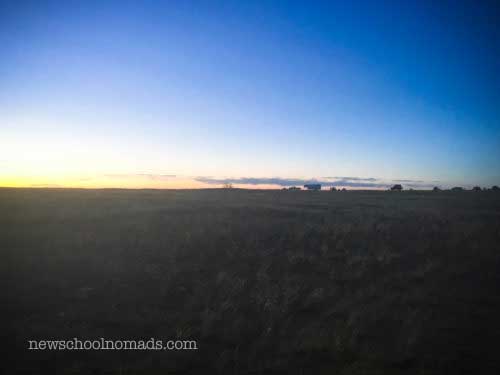 In the distance, we made out the outline a fifth wheel on a ridge. We hoped it was the overflow land we were looking for. It turned out it was. We couldn’t see much of our surroundings that night but we found a place to park. 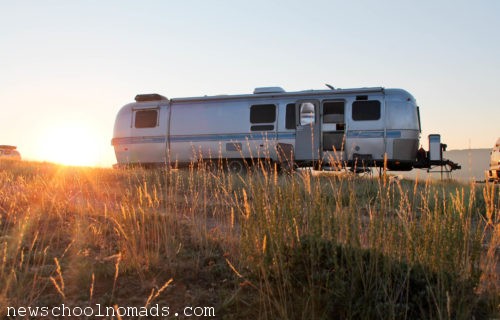 The next morning we were surprised by splendor. 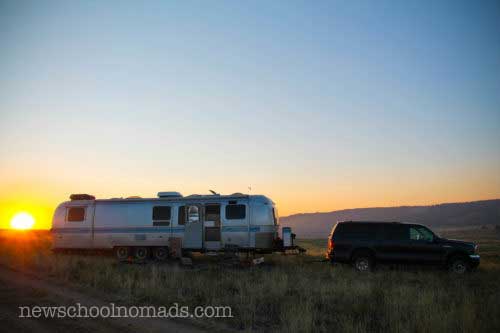 Credit for these photos goes to Thing 4 who takes it upon himself to wake me up before dawn. Day. After. Day. 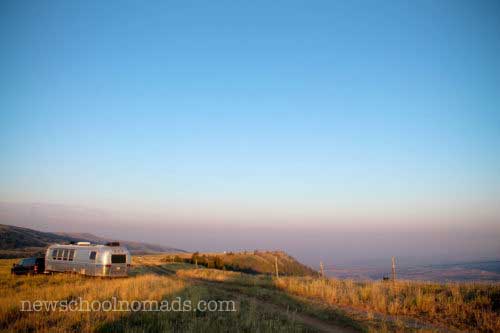 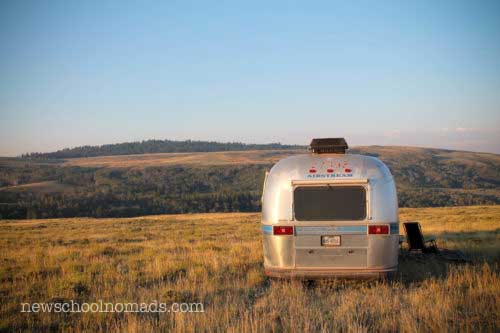 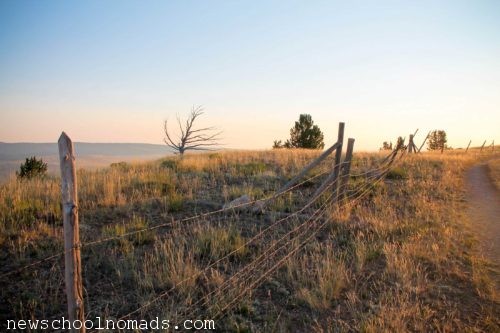 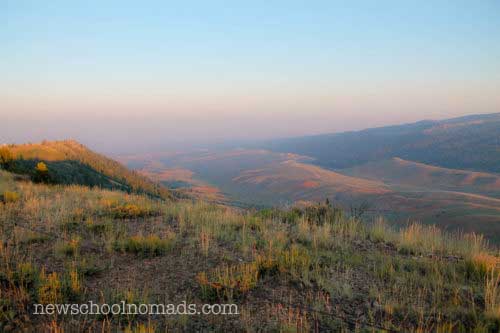 And so was the view out our front door. 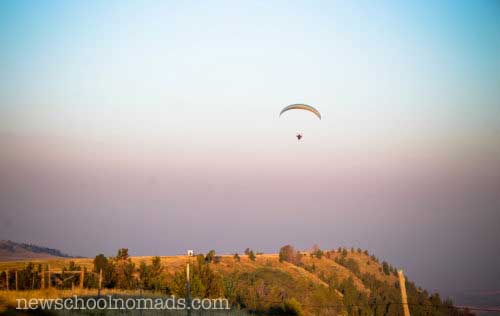 Paragliders came out to enjoy the quiet morning sky. 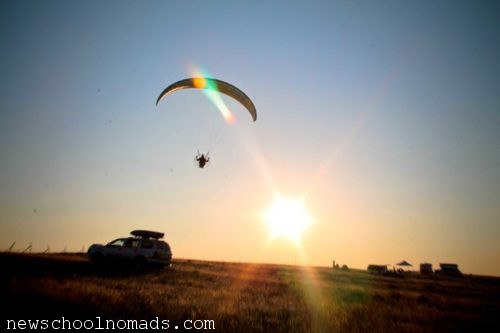 I would totally do this if I could get a written guarantee I wouldn’t die. 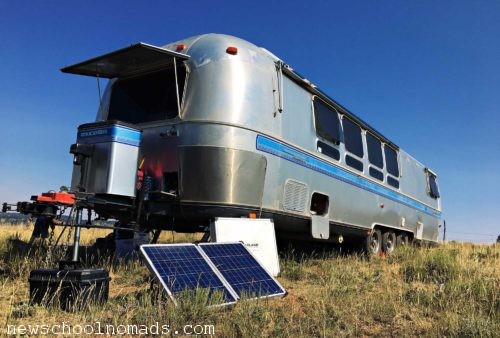 It was  perfect spot to set up our portable solar panel. 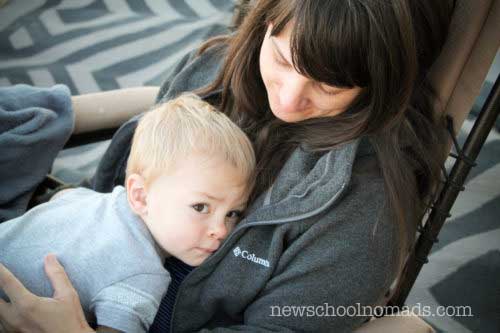 And the perfect place for some morning cuddles. 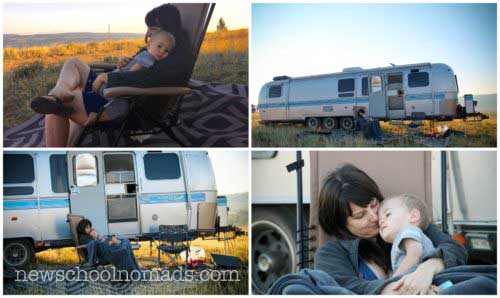 He’s totally worth the gazillion hours of lost sleep. 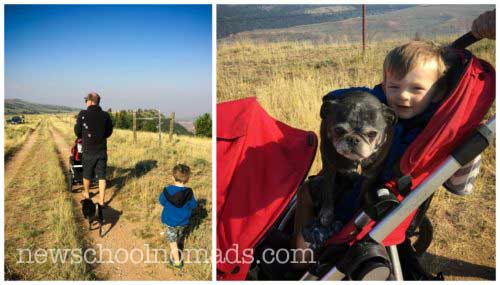 We took a morning walk down the dirt road. Nico got tired after five seconds and wanted to hitch a ride. 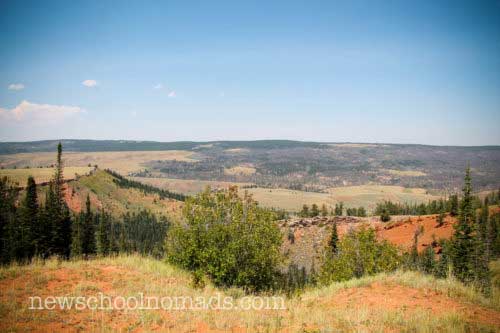 Then we took a drive around the area and may or may not have gotten chastised by angry ranchers for being on their land. We were driving down a dirt state road but somehow missed the sign that we were leaving state land and entering private property. Oooops. Our bad. We apologized profusely and promised to never do it again. 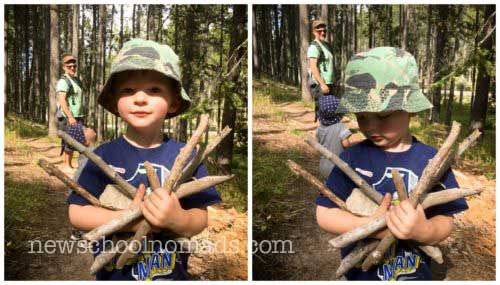 Later that afternoon, we took the Littles for a hike in the woods. We didn’t take any chances on meandering onto private land and chose a maintained trail in Casper Mountain County Park. Thing 3 gathered 10 thousand very special sticks.

Thing 4 fell in the grass and wasn’t sure what to think until his big brother “fell down” too. Then it was all giggles.

Thing 4 did most of the hike himself until he threw a rock on his own face. That takes skill. After that he was done walking and just wanted to ride. 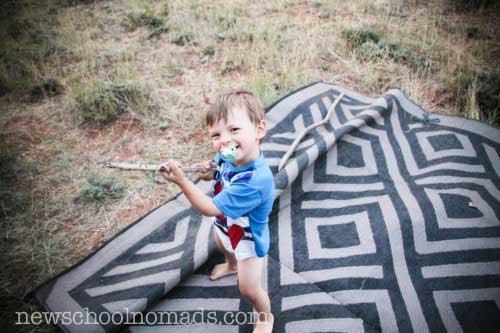 Back at home Thing 3 played with the universal toy of childhood. 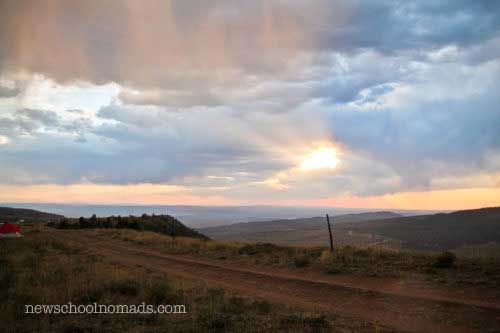 That evening the opening act was pretty spectacular. 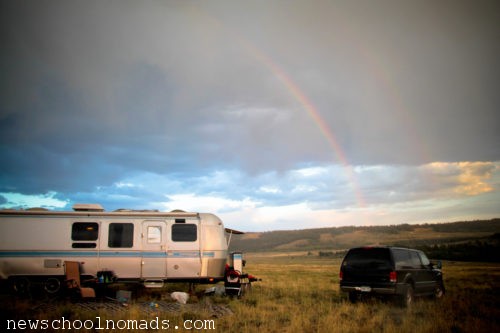 And it kept getting better 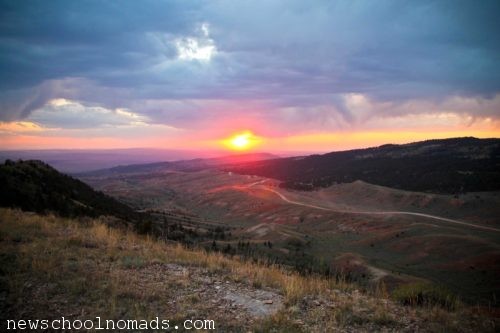 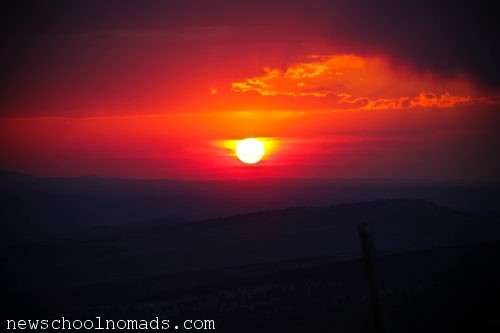 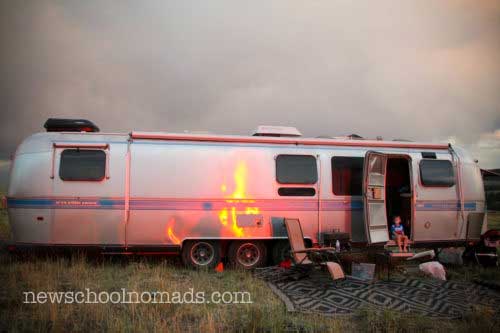 Until the sun caught our trailer on fire. Kidding that’s he reflection of the sunset. (Can you imagine how cool this would look when we polish our trailer!) 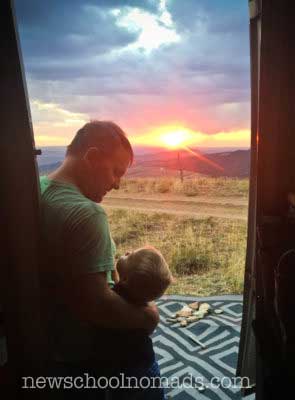 We weren’t the only ones who enjoyed the show.

The Littles were pretty mesmerized too.

The sunrises and sunsets alone were worth the effort but we had no idea of the show that was to follow the next day.

Late the following morning, we set up our camera for the one picture we would end up getting and sat back to enjoy the show.

The eclipse began. It was cool and all but I started to feel a little smug like I was entitled to my “ho-hum” attitude. 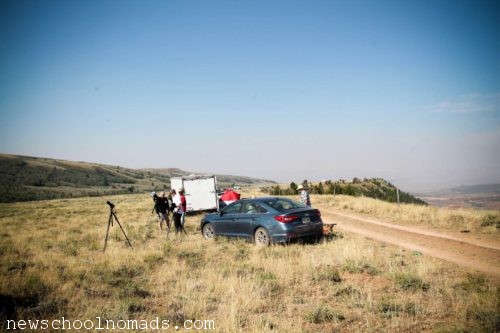 Our neighbors, a group of aging hippies, were awesome and way more interesting than the eclipse. They set up a telescope that we could look through and shouted fun things like, “time for your edibles” and “everyone take off your clothes”. I want to be them when I grow up. 😉 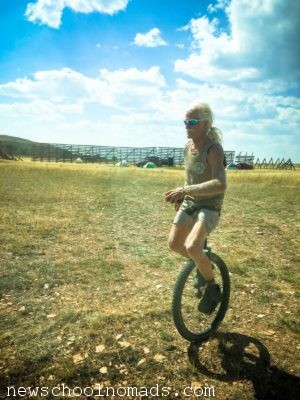 They even provided entertainment. I really want to be him when I grow up. Like really.

The eclipse was slow-moving so between doing dishes, watching a unicyclist, and taking care of the Littles I checked it every 10 minutes or so. Thing 1 found a good spot to chill and cuddle with his little brother for a little while.

You might be wondering about what we did with the Littles during the eclipse. You aren’t alone. I spent a week wondering about it because obviously I didn’t want them to lose their vision and by the barrage of eclipse safety in the media you would have thought the sun was a new phenomena. I have no idea how the entire world is not already blind. Anyway, the Littles don’t watch much television but this was one of those time when the benefits outweighed the waste of time. We set them up with a show, toys, and snacks in the RV while we enjoyed the eclipse right outside the door. It was a perfect set up because I didn’t have to worry about them trying to sneak a peek and I could remind my teens about staying safe without distraction. RVing for the win again! 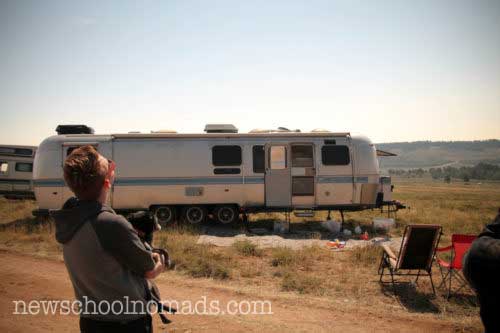 The temperature began to drop and we put on jackets but even though the sun was nearly covered it was still pretty bright.

Suddenly, it started getting dark. Being in denial that the Bigs are actually pretty grown up, I was still worried about them frying their eyeballs. Then someone said, “The sunset is all around us!” I stopped worrying about the Bigs taking off their glasses to soon and spun around to take in the most amazing 360 degree sunset. Next someone else shouted, “Look at the corona!” I pulled off my glasses and, overwhelmed by the beauty and the most pure light I’ve ever seen lost my mind. Lost. My. Mind.

Watch this video. Ignore my haphazard filming (I was focused on the eclipse.) and the fact I sound like a lunatic. It’s worth noting that I’m typically a pretty reserved person.

The eclipse was one of the most intense and beautiful 2 minutes and 20 seconds of my life. It was sublime in the truest sense of the word. Mind blowing. My body buzzed for a full 30 minutes afterwards. The moment when the last sliver of sun disappeared, that moment of totality when I took off my glasses, was like instantly being transported to another world. Everything familiar but so different. Completely surreal. A 360 degree sunset. And the corona of the sun… No words. Just awe.

And now I get it. 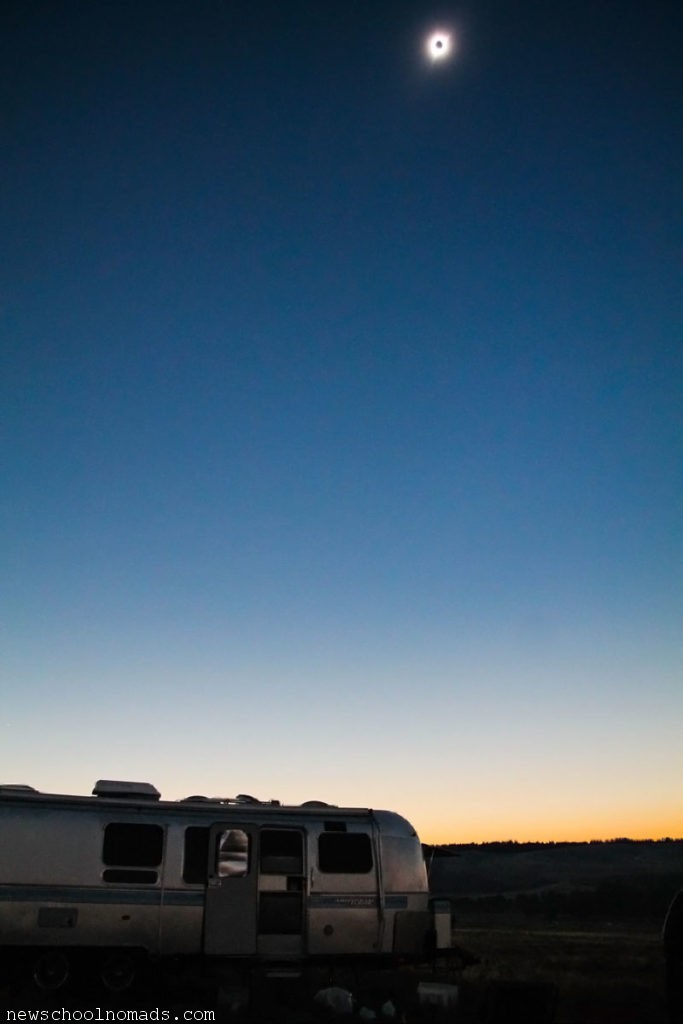 And here’s the one picture we got.