3 min read
On the Road

On the Road At Last

We felt like a thieves slipping through the night. Thieves refusing to follow “rules” and breaking out of the “box” we had created for ourselves. Thieves, tired from days of…

We felt like a thieves slipping through the night. Thieves refusing to follow “rules” and breaking out of the “box” we had created for ourselves. Thieves, tired from days of planning and plotting yet determined to complete the final phase of the mission.

Originally we had planned to leave in August.  We soon realized the absurdity of that plan and pushed our departure back to October 9th. It would have been a perfect way to celebrate our unofficial official anniversary. But as a bird had reminded us 12 and a half years ago when he dropped a “gift” on Brent’s breakfast muffin as we strolled along the Thames during the wee morning hours in newly engaged bliss– shit happens…even during the best of times. 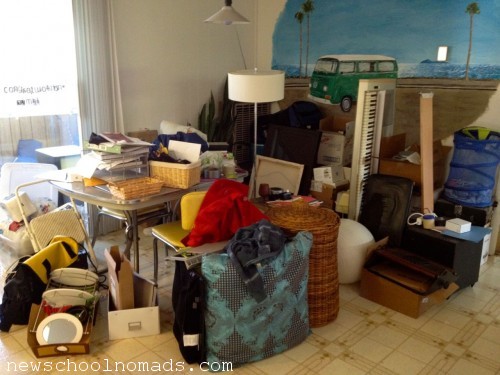 Brent got sick and lay in bed for 5 days.  Work projects took longer than planned.  No matter how much I packed it still felt like I was just starting.  We changed our date of departure to October 16th.  Then the 19th. 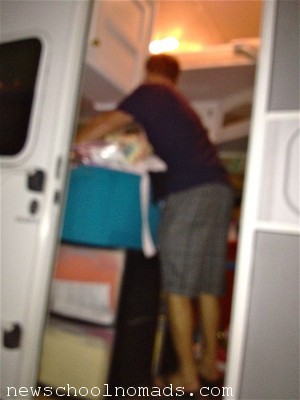 Finally on October 23, we found ourselves walking in stealth to the rv parking lot in the back of our neighborhood that had begun to sleep.  We had hitched the trailer to the truck before the sun had settled so our arms, tired from 15 hours days of packing and cleaning, were loaded with our remaining items.  Being in front of our little ragtag group, I held my breath hoping to avoid the spider webs that I knew hung like valences over the path every evening. The pugs ran in circles (we had accidentally packed away the leashes) around our feet, darting in and out of each driveway we passed.  Poor confused creatures.  The cat crouched in bag strapped across my body.  I like to think he was excited to be a part of our “heist”.

This was not how I imagined it.

During months prior, I had daydreamed of our departure and it looked like this. The warm California sun would pour out its magic making everything more beautiful than reality.  The RV would be meticulously packed and organized. We would stand in a circle holding hands praying for our trip.  We would hugs our friends one last time and lean out the windows waving and etching their beautiful faces into our minds.  Then we would drive into the sunset to live adventurously ever after.

And I loved it. 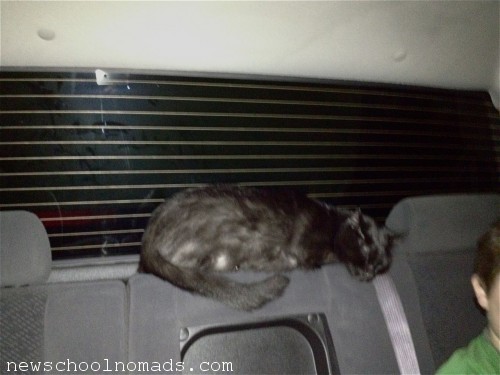 Life is rarely picturesque and beauty is so much more than a Hallmark card.   Once settled into the truck we said our prayers and drove north into the night.  The pugs were tucked into their “den”, the cat curled up, the boys fell asleep in the back seat, and Brent and I held each other’s sore and tired hands our eyes resting on the road.  It didn’t matter that Thing 2 was wearing his brother’s clothing, that we had at the eleventh hour let go of some of our favorite items, and I didn’t know where I packed my toothbrush.

We had done it.  After years of dreaming, we were on the road with almost everything we owned in tow behind us.  The fumes of exhilaration ran out and the peace of God settle my heart.  It will be ok. 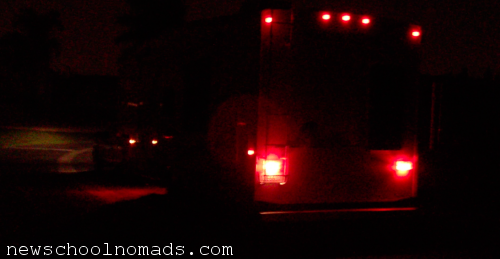 Share this:
END_OF_DOCUMENT_TOKEN_TO_BE_REPLACED
11 Comments on On the Road At Last
1 min read
Thrifty Threads Thursday

This evening we wanted to say goodbye to our little downtown. Downtown Ventura is a special place.  Not only is it blocks from the ocean, it’s a perfect mixture of…

This evening we wanted to say goodbye to our little downtown. 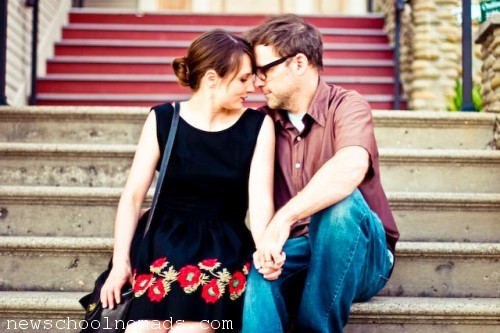 Downtown Ventura is a special place.  Not only is it blocks from the ocean, it’s a perfect mixture of mom and pop sprinkled with a little cooperate.  A movie theatre, a library, restaurants, and small shops line Main Street.  It’s an afternoon thrifters dream with at least 4 thrift shops, antique stores, and a Buffalo Exchange all within blocks. And if all else fails there is a Urban Outfitters and American Apparel. 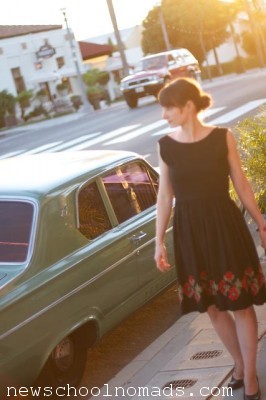 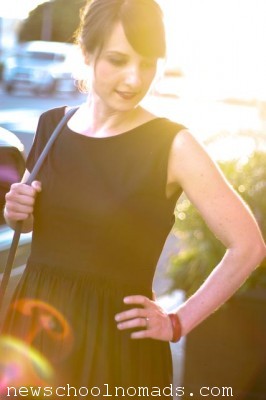 The afternoon heat was still lingering even as the sun set. The temperature to wear what may be my favorite dress before I pack it away for the year.  (Sniff.) 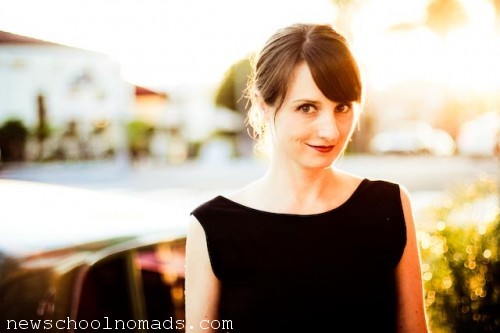 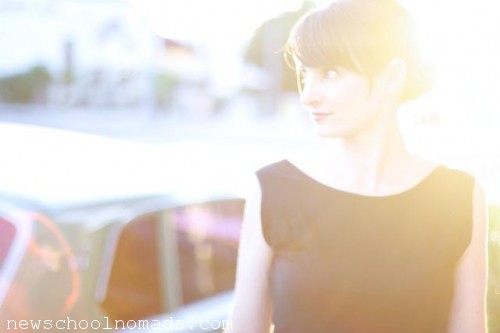 A treasure of a thrift store find, I’m wearing this dress even when I’m an eccentric old lady. 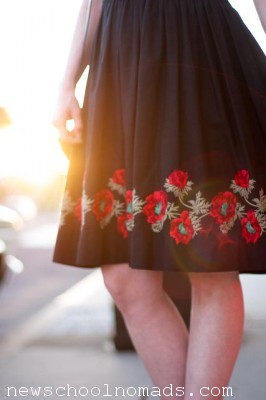 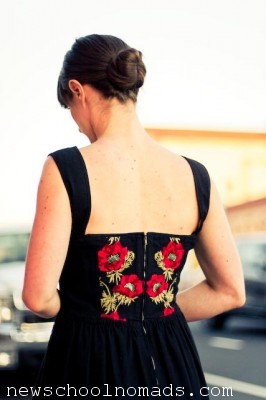 It’s black linen with embroidered flowers around the hem and on the back. 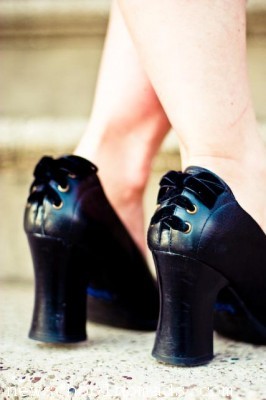 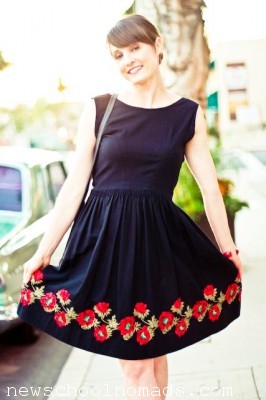 It makes me feel like twirling down the street and belting out “My Favorite Things”. 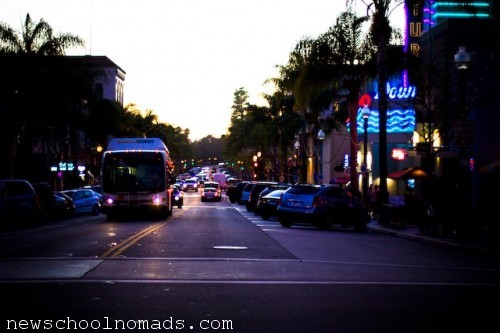 You will both be missed.