2 min read
On the Road

Day 55: Watch Out for Them Biten Dogs

Last night we arrived at our campsite at Lake Eufaula State Park in Oklahoma before dark. No small miracle. The campground was nearly empty and deer were roaming. I’m loving the…

Last night we arrived at our campsite at Lake Eufaula State Park in Oklahoma before dark. No small miracle.

Unfortunately, we discovered the panel that holds in the insulation on the bottom of the trailer had come loose. We also realized that was why a guy was honking and pointing to our trailer earlier that day. When we stopped we couldn’t find whatever it was he was making such a fuss over. Now we know. Just dragging insulation. No biggie. :-/

After dinner we drove around the campground to look at the Christmas light display. The display was impressive and included a giant brontosaurus. Like I said, impressive. It was cozy in the cab of our truck with four people up front listening to bad pop renditions of classic Christmas songs on the radio.

In the morning, we went to the nature center and I asked the ranger about venomous snakes. I have a habit of asking anyone who might know anything about snakes everything there is to know. It’s charming.

Then it was time to hit the road and head to Arkansas. It feels like we didn’t really give Oklahoma a chance. After talking to the ranger about the geography of Oklahoma I was wishing we had more time to stay and explore the state.

The drive to Hot Springs was loooong. Brent may or may not have insisted on stopping for Starbucks at the busiest strip center in all of Arkansas.

That evening we had dinner at a small restaurant in Y City. I picked up a paper and began browsing the real estate ads.  A four bedroom house on 20 acres for 155K?  The prices of real estate are unbelievable when you are used to California prices. Do we have any California friends who want to move to Arkansas with us?

I was ready to move until… 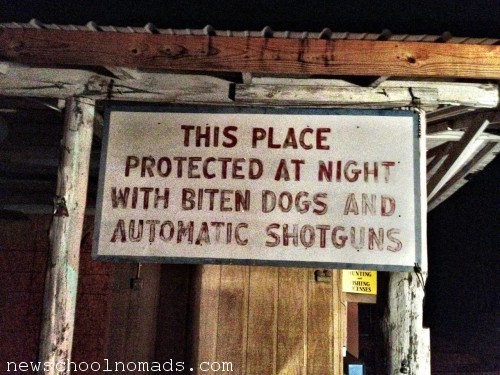 …we stopped for a bathroom break.

Share this:
END_OF_DOCUMENT_TOKEN_TO_BE_REPLACED
3 Comments on Day 55: Watch Out for Them Biten Dogs