While in Washington we made two quick trips across the border into Canada, one to Vancouver and one to Point Roberts which is actually a part of the US but I’ll get to that in a minute.

Despite the weather being perfect and an endless array of possibilities, we only have four decent pictures to show for the day.

Three of the city. 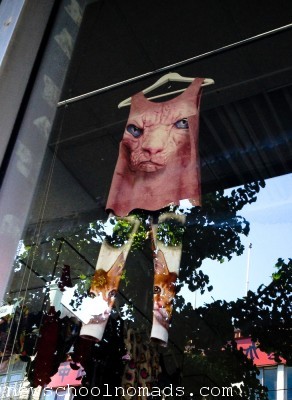 And a one of an angry Sphynx cat outfit.

Why so few pictures when there is so much to do in Vancouver, you ask?

So the morning started off well enough if you don’t mind being questioned like a criminal at the border crossing because your husband forgot about the time he was 21 years old and deported. At the time, he was in a band. They were playing a show in Canada but didn’t realize they weren’t allowed to bring merchandise into the country without a work visa. Anyway, they had to drive out and drive back in with proper documentation. It wasn’t a big deal until 20 years later and someone asks at the border crossing if he had ever been asked to leave Canada and, forgetting,  he said no. Oooops.

After a few extra questions we were cleared and on our way. Sort of.

We knew we wouldn’t have data on our cells phones in Canada but we didn’t realize exactly how much we use our phones for travel until we turned them off. I’m surprised we could still breath without an app. Regardless, we made it to the city without too much confusion.

However, things were about to get interesting.

A few minutes after arriving downtown a man ran a stop sign and hit the front of our truck.

After nearly two years of travel and 40,000 miles, we were in our first accident. In another country.

The man was extremely nice. He was very apologetic and asked if he could just pay cash for the damage. We were feeling overwhelmed in the moment and agreed that would be fine. It didn’t even occur to us to get an accident report.

After the accident, I was ready to turn around head back to the US.  The crash and metric system were making me feel incompetent. Brent insisted we enjoy our day.

I did my best. We explored Stanley Park, walked along the harbor to Gastown (which was very cool), and waited almost an hour in line for steamed buns at New Town Bakery and Restaurant.

But into the afternoon, I just wasn’t feeling it. I was consumed with worry about the accident. What if the guy said we ran the stop sign. Why oh why didn’t we just get an accident report?  We also realized we should have brought our bikes. It would have been a perfect day to explore the city by bike and I was too shaken up from the accident to drive around so we explored by foot. A lot. By the time we got back to the truck we were exhausted and headed back to the US without incident.

(As it turned out the man who hit us kept his word and paid for the minor damage. People can be so awesome!!!)

Point Roberts is part of the mainland of the United States but, oddly, not connected to it. It lies at the tip of a peninsula accessible by driving through Canada or taking a boat. A woman at the campground we were staying at told us it was “kinda neat” so we decided to find out for ourselves one evening.

We left a few hours later that we should have because by the time we reached the border crossing there was a long line presumably on their way home for the evening. Reaching the entrance, we were questioned but this time we just got a strange look when we said we were going to Point Roberts for “dessert”.

Little did we know that there wasn’t a place to have dessert or anything to eat that we could find. Had we done our research we probably could have guessed that a place that doesn’t even have a dentists might not have a large assortment of dessert places. We drove around looking at nothing and ended up at the beach to watch the sunset. 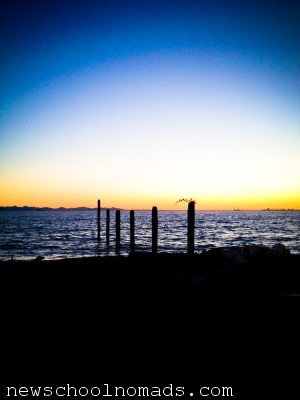 I’m thinking we need to head to Canada one more time because you know third time’s a charm and I hear those Canadian Rockies are breathtaking.

Sunsets and Sugar - Seattle Part I