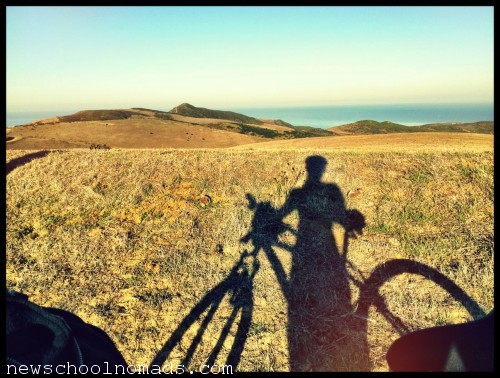 I heard the sound of a harp digitally strumming from a distant land of the awake.  I felt Brent’s warm body shuffle next to me.  It was 6:15 am.

Realizing that it was the alarm, I asked  just to be certain,  if it was indeed the alarm.  One can hope. I told Brent I was going to stay in bed and he could go alone with Matt.   He insisted I come.

Fifteen minutes later, I was wedged in the crevice between the bed and the closet nervously searching for my clothes.  Getting to your things isn’t always easy in an rv but digging through plastic drawers of black pants for a particular pair of black pants when your nerves are on edge is a test of character.  I got dressed and shuffled across the cold sidewalk to the house where Brent had prepared scrambled eggs and black coffee.

At 6:50 I headed upstair to wash my face thinking I have 10, probably 20, minutes to get ready.  Not so.  Matt showed up 10 minutes early.  We piled into his van and  headed off to Point Sal.  I settled into the front seat excited and nervous for my first ever mountain bike ride.

This explains why I haven’t owned once since I was 10 years old.  Once when I was riding along a country road in Indiana a car drove by and the side view mirror hit my forearm leaving a long red cut from my elbow to my wrist.  They didn’t even stop.

But the real fear comes from when I was in elementary and my little brother fell on his bike in the back yard.  The details are now  fuzzy in my mind but I remember it like this. My brother was riding around in the backyard when he fell going down a slope behind the garage.  The handle bar hit his stomach.  There was a red mark but the skin wasn’t broken. Thousands of little boys fall on their bikes every day so there didn’t seem to be reason for much concern.  However, my parents watched him for a few hours and noticed he was getting more lethargic. They took him to the emergency room.  He ended up being in the county hospital for a week getting sicker and sicker.  Why they didn’t do a ct scan right away or whatever it is they do to see what was wrong I don’t know.  Maybe because it was a small hospital and they didn’t have the right equipment.  Maybe the ct scans didn’t exist back then.  I dunno.   I remember visiting him and his little pale body lay motionless in the hospital bed with tubes coming out of his nose, mouth, and stomach.  All from a simple bike crash that didn’t even break the skin. After a week, he was transferred to a children’s hospital where they discovered he had a punctured pancreas. They removed a part of the damaged organ and he came home almost a month after the accident.  Just a little bike ride down a slope in our backyard.

Today, I was going to face my fear of bike riding and hit the trail.  I was nervous to be sure but I was also excited.  Brent used to love riding his mountain bike in the hills of Santa Barbara and for years I’ve dreamed of finding the courage to join him.

We parked the van and unloaded the bikes. 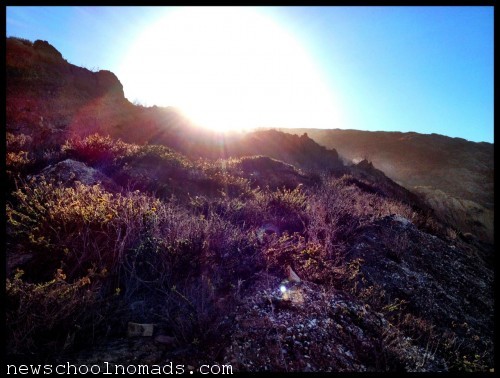 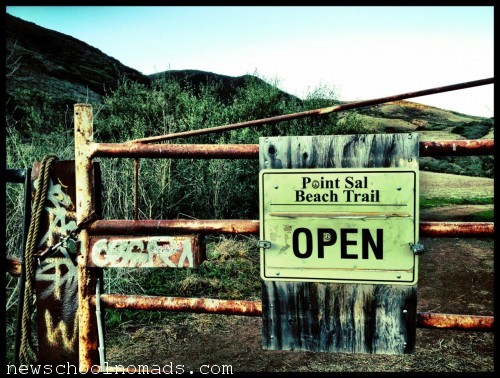 It was still cold from the night but the morning couldn’t have been more beautiful.  The sun was still barely above the mountains casting golden rays over the hills.  Matt and Brent gave me a few instructions and we headed up the old fire road.  Soon after we started, I realized that they were right and my seat was too low.  I wanted to be able to touch the ground with my feet.  However, my legs were getting thrashed and we hadn’t gone very far.  Raising my seat gave my legs an immediate relief and we continued upward.  Every turn surprised us with a new view seemingly more magical than the last. 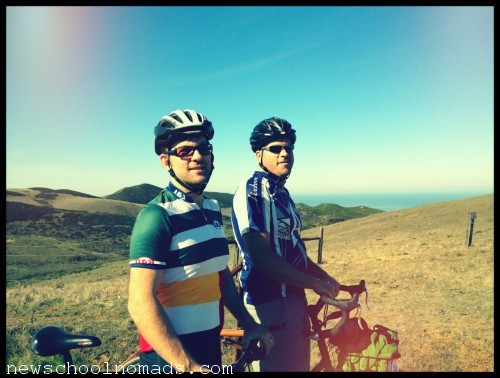 We reached the top and started our descent toward the beach.  They adjusted my seat and told me to put my weight back and ride my breaks if I needed it. 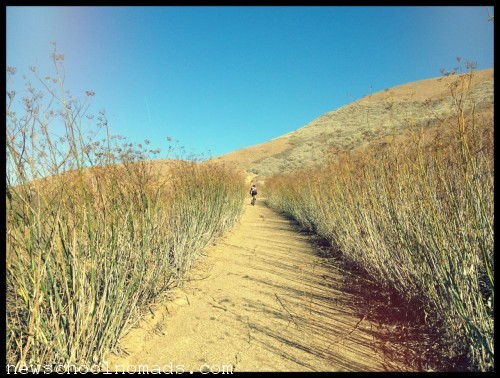 The road narrowed and tall reeds lined the sides of the path creating “a tunnel”.  Broken reeds poked up through the old asphalt like spears. They boys rode up ahead of me and I “sat back in the saddle” lost in the exhilaration overcoming a fear and of the ride itself.

The road narrowed again to a “single track” and I took a deep breath determined to continue on my bike. I went as slowly and as carefully as possible trying to avoid  deep grooves where the earth had been washed away.  At one point, I got off my bike and walk down the loose rock.  No shame in using my head. 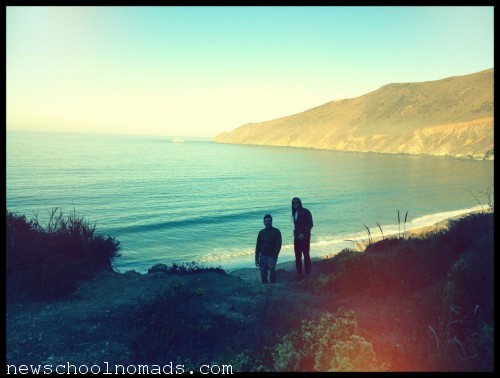 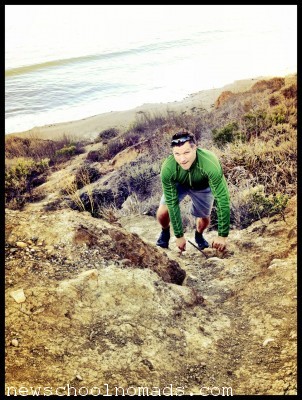 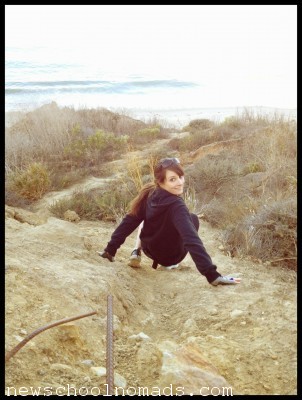 We parked and continued by foot down the hill to the remote beach. 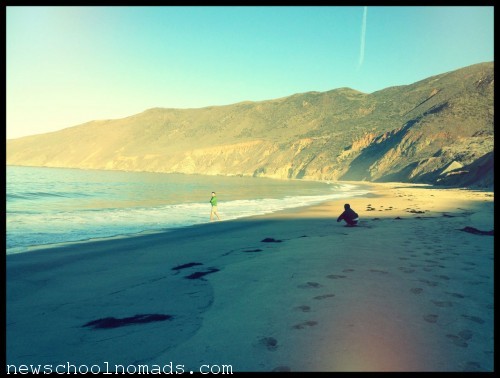 The sun had warmed the day and we walked along the sand each in our separate thoughts. 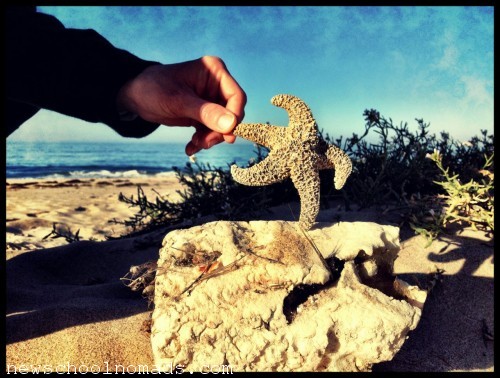 I found a dancing starfish.  (Yes, I know they are technically called sea stars.) 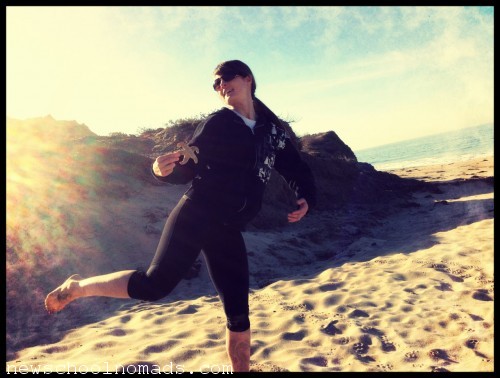 And I decided to dance with it. 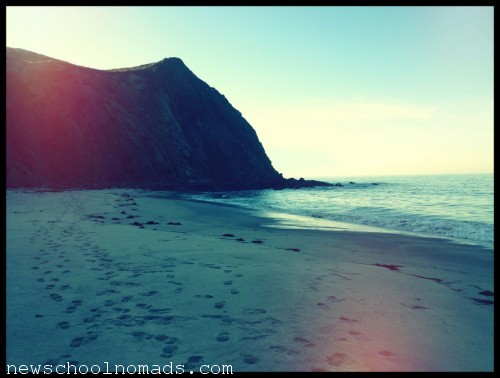 We saw dolphins.  There was an abandoned dirt bike under a cliff.   One can only imagine how it got down there. 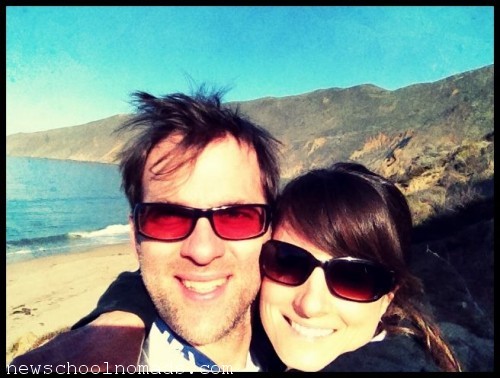 The day was perfect yet there was work to be done so we headed back up the trail toward our bikes and began our ascent.  Back on the rough single track I fell.  I slipped off the back of my bike pulling it onto me and landing in the tall reeds.  Ouch.  But I lived and continued by foot to our meeting place. 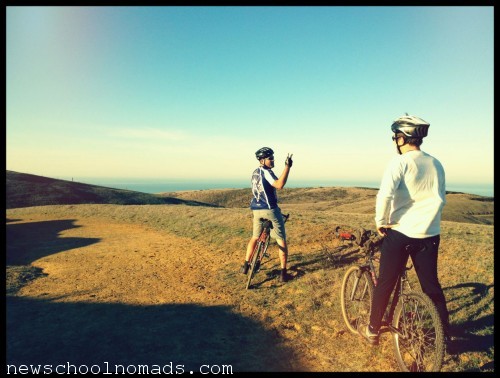 I headed up the next part of the trail  ahead of the boys because I knew within minutes they would catch and pass me.  They did. 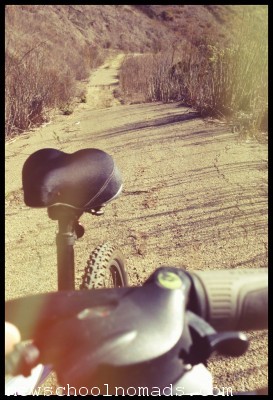 Halfway up I realized I was going to half to walk and half ride.  It was quite a blow to my ego but a relief to my legs. What goes down must go up when mountain biking.  I continued walking and riding until we reached the peak. 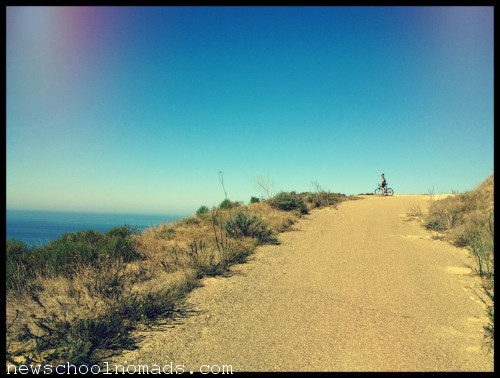 After a short rest we started down the last phase of the trail.   We adjusted my seat and took off.  The boys again quickly disappeared ahead of me checking in every so often to make sure they hadn’t lost me off the side of the mountain.

Avila and an Old Friend